Insulating concrete formwork (ICF) otherwise known as permanently insulated formwork (PIF) is an insulated in-situ concrete system of building that is quick to construct and offers levels of performance significantly better than that available from slower, more traditional approaches to building. Popular in Germany where it was born in the early 50’s, it is grown rapidly in North America starting as a basement construction and now has approximately 8% share of the low rise housing market in Canada and the USA.  Its performance far exceeds Building Regulations

ICF is based on hollow lightweight block components that lock together without intermediate bedding materials, such as mortar, to provide a form work system into which concrete is poured. The block is formed of sheets of insulation materials normally expanded polystyrene tied together with plastic or steel ties or an integral web of the same insulation. The later is manufactured as a complete block whereas the forms with ties are formed from sheet material. Some systems are delivered complete and some with ties which are clipped together on site to make the ‘forms’. These latter have the panels delivered flat packed. Some of the systems which are complete with hinged ties are also delivered flat packed.

Fresh concrete is poured into the forms built up to 3 metre high as a complete wall. This is normally dome by pump. Once the green concrete wall is set, it becomes a high strength concrete frame structure with the formwork remains in place as thermal insulation, providing u-values ranging from the standard 0.30 w/mk as required by the current Building Regulations down to 0.11 w/mk – ideal for zero energy buildings Star Level 6 in the Code for Sustainable Homes. The building process is quick, tidy and precise, with lower equipment requirements than alternative methods and only semi-skilled labour.

Creative design (without compromising performance) is encouraged by the availability of a comprehensive range of components, further enhanced by the option to incorporate reinforcement for basements or multi-storey projects. The highly insulated structure may be clad internally and externally with a wide range of finishes, including plaster, masonry, curtain walling and renders. Most of the systems are marked on the outer faces of the forms to indicate where positive screw fixing can be made with self tapping screws into plastic or metallic webs.

The differing insulating concrete formwork systems cause variations in the shape of the concrete within the wall: 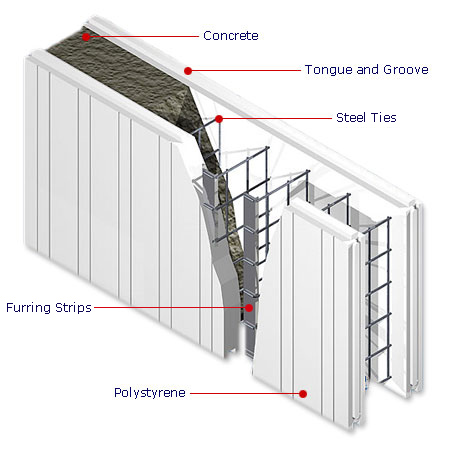 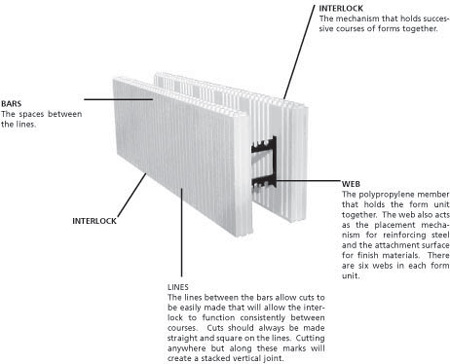 We specialize in Concrete and Foundations. Engineering, Design & General Contracting Services upon request or referral